There has been a massive amount of misinformation concerning supposed Orgone energy items in recent years. One of the most fundamental misconceptions is the distinction between Orgonite® and an Orgone Generator®. Though some people mistakenly refer to our Orgonite® pieces as “Orgone Generators”, there is an important difference.

Orgonite® is basically a smaller, more powerful version of Wilhelm Reich’s original Orgone accumulator. Reich’s Orgone accumulator - made of layers of wood and metal - was designed to “capture” ambient Orgone energy in order to concentrate it around a person, thereby passing on beneficial energy to the person inside the accumulator. Reich found that the more layers of organic (wood) and inorganic (metal) material present, the stronger the Orgone field. The key is that layering harbors and concentrates a dynamic between the organic and inorganic material (analogous to feminine and masculine, Yin/Yang) that causes the accumulation of Orgone -- the more layering, the more interaction, the more Orgone accumulation.

It’s important to note -- not all Orgone energy pieces are created equal. A good rule of thumb -- if you can see the layers, you’re looking at weak or non-existent Orgone accumulation. Visible layers are often due to the use of large metal shavings versus fine metal powder. Don’t be fooled -- it’s a mathematical fact that fine powder provides more surface area for interaction (and, therefore, more Orgone will accumulate) than metal shavings! Orgonite®, with its thousands upon thousands of layers, is equivalent to a “building full” of weaker Orgone energy pieces made with visible layers of metal shavings.

However, we recommend you use our pyramids in sets of multiple pyramids linked with one of our Orgone Generators. When our pyramids are linked with a generator, they receive a continuous charge of positive, flowing Orgone energy. The constant flow of concentrated life energy dramatically improves the usefulness and benefits of the pyramids -- in essence, each pyramid becomes an “Orgone lamp” that radiates with pulsing life energy and passes that beneficial energy on to anyone in the surrounding area!

I’m in love with this thing. I am very in touch with my body and spirit and would explain the feelings I get from the generator as warm loving inviting and even orgasmic. I have had for two weeks and have already seen manifestations. I have pendants and work almost 80miles from my home where my generator is and it feels as though I have my lovely generator with me all day. It has added a new element to my life for a new chapter and I’m very grateful!!! Thanks Karl Hans Welz and RIP. And thanks to OrgoneGenerator.com. I will be purchasing a Rad5 and a power booster!!!

L
Orgonite® Pendants - Pair of Structurally Linked Orgonite® Pieces Leo
I just installed it for 2 days, can feel the difference

I don't know yet what I am feeling. But there is definitely something different when I clicked through the different frequencies and meditate. :) Thank you so much!

I am not setting it on 3.5Hz for meditation. I can feel that my mind isn't as jumpy anymore.

Great Buy Worth Every investment. From Charging water into Life and great tasting water, relaxation for the whole family unit with real life orgone pulsing with easy controlling the output HZ.
This is a real deal.
And more to explore and experimenting ongoing with this performer capabilities for guys like me with limited understanding and new to this generator.
This my 3rd generator upgrade after Ju99 and PFC 2000DL.
Thanks Again a Million to Orgone generator.com for great innovative technology forwarded to the world. 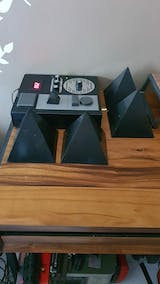 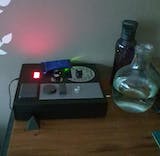 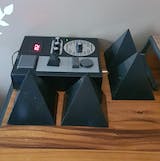