The RAD 2000 is equipped with three (3) dials which can be used to connect with the desired trends and targets of your radionics operations and lock in radionic rates. Each dial has settings ranging from 0 - 100, allowing 1 million settings of the device.

The RAD 2000 also has a continuous frequency setting dial to configure the frequency of the Orgone output from the device, which ranges from 0 - ~500 Hz. Please note -- the RAD 2000’s continuous frequency setting dial is not designed for exactness, so people who want the ability to set specific frequencies with precision should consider either a device with pre-set frequencies or a digital frequency display (such as the PFC 2000 DL, PFC 2400 HD, Performer 2400 HD, etc.).

Additionally, the RAD 2000 has a stick pad made of Orgonite® that can be used to help find the rate if you are not exactly certain what rate you should choose for a specific operation. Some users find that using both hands to find a rate engages both sides of the brain and improves the effectiveness of operations -- this is called an ideomotor response. The device also comes with a stainless steel well plate where you can put the structural links of your operations (e.g. a photo, handwritten intention, etc.).

*Orgonite® Power Booster and Pendants in photos not included*

From customer service which was amazing. My original order was lost in transit and Dave sent out another order ASAP. So far am definitely feeling the Orgone and feels like sky is the limit. Thanks Dave

So far I’m loving my orgone generator. I feel much more energized. I’ve set my intentions and used it to charge my water and crystals. I’m excited to see my manifestations come to fruition. I definitely plan on expanding with the use of orgone pyramids and cards. 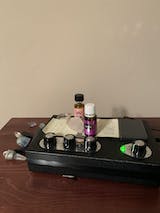 I have experience with energy and meditation, but had recently found my self in a rut. I have successfully used this device for minor changes in my life that have a decent effect on my self and my life. Nothing big yet but the energy is definitely there so its a solid product.

A friend of mine's son in law recently suffered a stroke. There was bleeding in his brain and the doctors weren't able to offer a prognosis for his condition. My friend sent me his son in law's picture and I ran a trend on my RAD 2000, asking that his stroke be healed, with the son as the target. Three days later the son was out of the hospital with almost a complete recovery. The doctor called this a miraculous recovery. Cause and effect?

I definitely notice much better sleep, Thanks a lot for a quality product

Powerful, exquisite build quality, fast shipping... would not buy a radionics instrument from anywhere else. Thank you!

The paired pendants with the generator work amazingly! It’s been really helpful in creating calm, peaceful environment everywhere I go. I wear one pendant, keep the other one on the generator. Awesome!!

The Orgonite works really nice. I put the power booster on the PFC 2400 HD Orgone Generator and put the round Orgonite on my forehead just to make sure, that my brainwaves are in sync with the Freuquency of the Machine. I was using 1000hz and it feels amazing.

The Trend cards have a nice look. I use them for manifesting money in my life.