Our Orgonite® Pendants are the highest quality Orgonite® pieces available anywhere. Our Orgonite® is made by the original inventor of Orgonite® - Karl Hans Welz - using a special recipe and process that has been perfected since Karl made the first piece of Orgonite® in 1992.

Prior to creating Orgonite®, Karl studied the work of Wilhelm Reich for years and built and experimented with several Orgone devices based on Reich’s original blueprints. In 1991, Karl created the first Orgone Generator®. A year later, Karl created the first piece of Orgonite®. Made of high quality epoxy, 100 Micron 99% pure iron powder, and quartz crystal point, our Orgonite® Pendants are worth hundreds of pieces of more elaborate-looking “Orgonite” with visible layers of material.

True Orgonite® is basically a smaller, more powerful version of Wilhelm Reich’s original Orgone accumulator. Reich’s Orgone accumulator - made of layers of wood and metal - was designed to “capture” ambient Orgone energy in order to concentrate it around a person, thereby passing on beneficial energy to the person inside the accumulator. Reich found that the more layers of organic (wood) and inorganic (metal) material present, the stronger the Orgone field. The key is that layering harbors and concentrates a dynamic between the organic and inorganic material (analogous to feminine and masculine, Yin and Yang) that causes the accumulation of Orgone -- the more layering, the more interaction, the more Orgone accumulation.

Orgonite® is also made up of layers of organic and inorganic materials. We use high quality epoxy (carbon-based) for the organic material and fine iron powder for the inorganic material (we use iron because we believe it resonates with the iron in the human body and blood). Using fine iron powder means more surface area for interaction to occur between the iron and the epoxy. So, in essence, our Orgonite® is made up of thousands of layers of organic and inorganic material. Like Reich’s original Orgone accumulator, Orgonite® accumulates and stores Orgone energy -- like a life force battery. But, due to the intense layering effect, our Orgonite® is much more effective at accumulating and amplifying Orgone energy than the now-primitive Orgone accumulator.

It’s important to note -- not all “Orgonite” is created equal. You can find many people selling colorful pyramids and elaborate-looking pieces designed to make for nice home decor and ornate jewelry. A good rule of thumb -- if you can see the layers, you’re looking at weak Orgonite. Visible layers are often due to the use of large metal shavings versus fine metal powder. Don’t be fooled -- it’s a mathematical fact that fine powder provides more surface area for interaction (and, therefore, more Orgone will accumulate) than metal shavings! Our Orgonite®, with its thousands upon thousands of layers, is equivalent to a “building full” of weaker “Orgonite” pieces made with visible layers of metal shavings.

Our Orgonite® Pendants can be linked with an Orgone Generator® to increase the device’s output and enhance energy transfer. Simply turn on the generator, slide one of the Orgonite® pendants onto the silver output tube, and keep the other Orgonite® pendant in your pocket. The pair of pendants creates a “structural link” between you and the device, enabling you to receive the Orgone output from your generator without loss wherever you are in the world!

Even on a budget it's affordable. Invest in health people. You'd be wise to get anything from these folks. Top notch high quality.

I almost slept for 24 hours straight after I plugged it . Still adjusting to the feeling.
Good customer service. Quick response to mails. 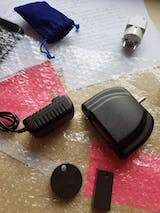 A wise investment.i am very pleased!

Very sensitive to energy. Immedietly noticed the increased lfie force moving through me. Amplified the energy of items placed near it.

Orgonite® Pendant - Rectangle - Highest Quality, Made by the Inventor
4 reviews

Orgonite® Pendant - Round - Highest Quality, Made by the Inventor
6 reviews

My unit came without a user manual. Can I buy one?

May I exchange this for a rad 1000? I believe I really need a starter or one generator.

Got a grounded feeling as soon as I turned it on!

Very fulfilled with the product so far. I could feel the Orgone and I also charged my water with it and felt a complete difference. I am very grateful and have contemplated getting a unit for a while. I wish i did it sooner!